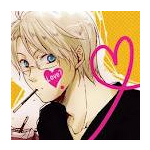 Welcome to the user page of the Founder of this wiki, Destiny Calling. This user is a major fan of anime, so you may find a lot of anime references on this page. Also, this user is such a huge fan of anime, that she created MewClan, a clan for people who are fans of anime and cartoons.

I'd rather be called Destiny, but I would also accept the other four. Destany-chan/sama or Amon mostly. If you wish to know more about me on FanFiction, just click here. 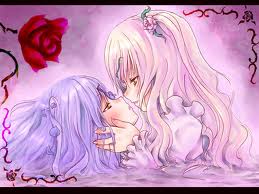 I just wanted to post this picture. It's just so cute, even if it is yuri.

Hey! As said above, I love anime. Not including Sailor Moon or Pokemon which I watched when I was younger, Tokyo Mew Mew, or should I say Mew Mew Power, is my first anime. Then, I was into Mermaid Melody, then, well...I just got hooked.

My most favourite anime are Digimon, Panty and Stocking with Garterbelt (For mature audiences only), Fairy Tail and, most of all, Rozen Maiden. I have other favourites as well, but these are the major, top of the chart ones. I also love Shugo Chara!

Recently, I got interested in Tokyo Mew Mew again, and have started rewatching the episodes.

Should you feel curious about the above anime, they all have wikipedia pages. Some even have anime or manga that are still on going. So go on, enjoy.

Favourite Characters
Rozen Maiden: Suiseiseki and Souseiseki. I also like Hinaichigo and Shinku, but I prefer the twins.
Tokyo Mew Mew Power: Pudding-chan. Hands down. I love all of them, but Pudding is on top. Defo. ^_^
Panty and Stocking: Stocking. I like Panty as well, but Stocking is more bada**
Fairy Tail: Lucy and Erza. Erza is just bada** and Lucy is so cool. ...But it is so funny when she's trying to be sexy and people just blow her off! XD
Shugo Chara!: Rima. The adorable Ri-Ri-tan! She 'Bala-Balance's into my top heart~!

Favourite Pairings
Rozen Maiden: Jun x Shinku (I don't really care if she's a doll, these two belong together!), Suigintou x Kirakishou x Barasuishou (Meaning that, if you take off one side, then you'll be left with a couple. Writing it like that is only easier though.)
Tokyo Mew Mew Power: Ichigo x Masaya (I'm a fan of the canon), Pudding x Tart (These two are cute. Very very cute. And technically canon), Minto x Zakuro (So I'm a fan of Yuri, big whoop!), Lettuce x Ryou (I just love these guys together! I don't know what people see in Lettuce x Pai.)
Panty and Stocking: (Yes there are couples in here) Panty x Brief (It's pretty much the main pairing in the whole show!), Stocking x Ghost (The ghost doesn't have a name, but they are still so cute. Why did he have to go to Heaven when he proposed to her?), Panty x Stocking (Wow...Incest AND Yuri...what is wrong with me?)
Fairy Tail: NaLi (Natsu x Lisanna; really cute), NaLu (Natsu x Lucy; more of a NaLi fan but there is millions of NaLu fanfics, so it's starting to grow on me), Jerza (Jellal x erza; one word: KAWAII~~!!)
Shugo Chara! Tadamu (What is with those crazy, messed up Amuto fans??), Kukaya (Kawaii~~!! Ace x Jack!), Ikutau (Incest...long story...), Rimahiko (The ultimate couple!! The whole world loves it!! ...Except those crazy Amuhiko fans...What the h*ll is wrong with them??)

And here is a very, very, super, super pwning Rimahiko picture. They're chibi-tised: 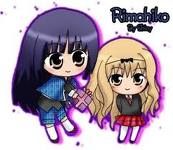 As you all know, I live in a different time zone to the majority of the site. So, here is my timetable and when I will be on if there is nothing to stop me:

Thursdays - I have dancing on Thursdays, from 4-7:30 pm. So, unless the class is canceled, I won't be on on Thursdays until after.

Weekends and Holidays - I live for these! I wll be on from my morning to my next morning, meaning that I'll be up until past midnight. To you guys in America, it'll be from your night to your afternoon. I jokingly call it peak time because you're all on. LOL ^_^ :3

Tutorials and Other Wiki Help Stuff

Chat with My Prophecy Cats!!

I am in love with this. Vocaloid is a special program them in Japan have developed. To avoid confusion, it's basically computers that can sing using the vocal chords of voice actors and actresses.

My favourite vocaloid is the UTAUloid or Boucaloid, Kasane Teto. The song Fake DIVA is really sad, and it tells he true story about her life. She was originally released as a voiceless Vocaloid for April Fool's Day. All more recent songs are more upbeat and...Teto. Which is why I like her. ^_^

thumb|300px|leftCOSMiCA
This is GUMI. Megumi Nakajimi's vocal chords are used for this Vocaloid.

thumb|300px|leftMelt
This is Hatsune Miku, Vocaloid's most popular model. She is what made Vocaloid famous, especially worldwide.

This is one of Miku's first songs. She has since made plenty of other bestsellers.

thumb|300px|leftNebula
I love this video! This was the first Hatsune Miku video I watched, and my first thought was 'EPIC!'

thumb|300px|leftGemini
A dead cute song that looks more on the twin side of the Kagamines. It's really cute, and one of the first few vocaloid songs I listened to.

thumb|300px|leftTrick and Treat
A dead creepy song. Especially this version, made by motokikusanagi2009.

Retrieved from "https://warriorcatsrpg.fandom.com/wiki/User:Destiny_Calling?oldid=63736"
Community content is available under CC-BY-SA unless otherwise noted.